A timeline of Walter Mondale’s life 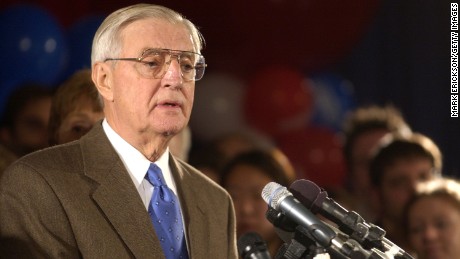 (CNN)Here's a look at the life of Walter Mondale, 42nd vice president of the United States.

Nicknamed "Fritz."Mondale announced during his acceptance speech at the 1984 Democratic nominating convention that he would raise taxes in order to reduce the budget deficit. "Let's tell the truth. . . Mr. Reagan will raise taxes, and so will I. He won't tell you, I just did."Colorado Sen. Gary Hart defeated Mondale in the New Hampshire primary in 1984 and had initial success positioning himself as the candidate of new ideas, until Mondale remarked, "When I hear your new ideas, I'm reminded of the [Wendy's] ad, 'Where's the beef?'"

1956-1960 – Lawyer in private practice.1960-1964 – Attorney General of Minnesota.1964 – Appointed US Senator from Minnesota after Hubert H. Humphrey is elected vice president. 1966 – Wins reelection to the US Senate.1972 – Wins reelection to the US Senate.1975 – Publishes his book, "The Accountability of Power: Toward a More Responsible Presidency."July 15, 1976 –Jimmy Carter asks Mondale to be his vice presidential running mate on the Democratic ticket. January 20, 1977-January 20, 1981 – Mondale serves as vice president under President Jimmy Carter.November 4, 1980 – Carter and Mondale are defeated in the presidential election by Ronald Reagan and George H.W. Bush.1981-1987 – Member of the firm Winston & Strawn.July 1984 – Democratic presidential candidate Mondale chooses US Rep. Geraldine A. Ferraro (NY) as his running mate, the first woman vice presidential candidate for a major party.November 1984 – Mondale and Ferraro are defeated in the presidential election by Reagan and Bush.1987-1993 – Partner at Dorsey & Whitney in Minneapolis.1993-1996 – US Ambassador to Japan under President Bill Clinton.1997 – Rejoins Dorsey & Whitney as partner and senior counsel.1998 – Envoy to Indonesia under President Clinton.October 30, 2002 – In Minnesota, becomes the Democratic-Farmer-Labor Party's candidate, filling the ballot position of the late Senator Paul Wellstone, who died October 25, 2002, in a plane crash.November 11, 2002 – Is defeated by Norm Coleman (R) in the race for the US Senate.June 24, 2008 – Accepts position as chairman of the Maureen and Mike Mansfield Foundation, a non-profit organization that promotes US-Asia relations.August 1, 2008 – Becomes Norway's honorary consul general for Minnesota.October 16, 2008 –"Fritz: The Walter Mondale Story," a documentary about Mondale's life, premieres at the Minnesota History Center.January 20, 2010 – Resigns from Norwegian honorary consul general post.October 2010 – Publishes a memoir, "The Good Fight: A Life in Liberal Politics," with David Hage.February 12, 2014 – Undergoes successful heart surgery in Rochester, Minnesota.March 7, 2015 – Is released from the hospital after being admitted with influenza.Original Article

Opinion: What I learned helping Reagan prepare for the 1980 presidential debates

Opinion: What I learned helping Reagan prepare for the 1980 presidential debates