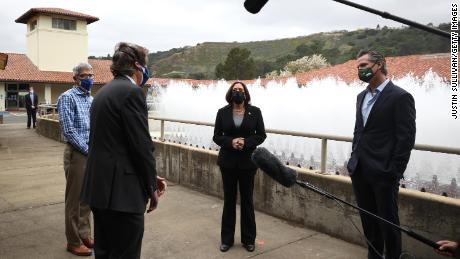 (CNN)Top members of the Biden White House have appeared with California's embattled Democratic governor, Gavin Newsom, twice over the last week — a signal of support for a politician who is likely to face a recall election.

Newsom accompanied Vice President Kamala Harris on a tour of a water treatment plant in Oakland, California, on Monday, where Harris was tasked with promoting the Biden administration's infrastructure plan. Newsom praised Harris' efforts. "We talk a lot about infrastructure. We have the ability to deliver on it. And for the vice president to be here to be delivering not only a package for consideration to Congress, but even delivering on the priorities that we hold dear here in the state of California is extraordinary," Newsom said. The two lawmakers with California roots are longtime friends, but Monday's visit marked the second time in a week that Newsom appeared with a White House VIP. Last Wednesday, Newsom also joined first lady Jill Biden during her visit to Delano, California, for a "Day of Action" event on Cesar Chavez Day. And three weeks ago, ahead of a different trip to California, the vice president's office released a statement saying she held a call with Newsom and "reiterated her support for the Governor." Read MoreEfforts to recall Newsom began last year, fueled by anger over the restrictions he had put in place to curb the spread of coronavirus in California. But the recall campaign gained steam as prominent state Republicans threw their weight behind both the organizing and fundraising efforts. Recall supporters have turned in more than 2 million signatures in order to qualify the recall to be on the ballot. Their verification is pending, but the expectation is that the recall will likely move forward. A recent Public Policy Institute of California poll indicates that Newsom is in a solid position to defeat the effort. Four in 10 likely voters said they would vote to remove the governor in a recall election, but 56% of likely California voters said they would vote against removing him. Newsom's approval in the poll is 53%, similar to the standing he's had since February 2020.The governor has defended his decisions related to the pandemic. Newsom launched a campaign last month to counter Republicans, saying the recall was being led by "anti-vaxxers, Q-Anon conspiracy theorists and anti-immigrant Trump supporters."An ad from the campaign blames "violent White supremacists like the Proud Boys, who attacked our nation's Capitol on January 6" for the recall push.The White House has consistently said they continue to support Newsom. And in mid-March, Biden cited Newsom's response to the pandemic among governors successfully responding to the coronavirus pandemic. "We can put politics aside and meet this moment, like governors all across the nation are doing. Mike DeWine in Ohio. Gov. Larry Hogan in Maryland. Gov. Charlie (Baker) in Massachusetts," Biden said in late March. "Gavin Newsom in California. Jay Inslee in Washington — hard hit. Gretchen Whitmer in Michigan. New York Gov. Andrew Cuomo's briefings are a lesson in leadership." But when White House press secretary Jen Psaki was asked last month whether the President had plans to personally support Newsom if the recall makes it onto the ballot, Psaki said at the time, "We're not quite there yet." "We've spoken out in support of Gov. Newsom and against the recall, so that remains our position," she added.Original Article

Why an infrastructure bill could help jobs bounce back faster

CDC updates guidance for cleaning surfaces to protect against Covid

CDC updates guidance for cleaning surfaces to protect against Covid

Women who wake up in the night are TWICE as likely to die young, docs warn